The worse part of having an x-ray is that the metal plates they use are cold, also it is not often you are shown them by a doctor and told what they really mean. I am pleased to say at Harefield Heart Hospital this is not the case and they have even been kind enough to let me have copies.

X-rays are viewed as seen below, as if we were facing each other my left is on your right. Now you can watch some of those medical programs like ER and spot that the x-rays are sometimes back to front.

Well here I am, and I have never looked so good?
You don’t have to agree!

As you can clearly see even before I had heart surgery to repair my faulty Aorta valve, my heart was already enlarged. The hope was that the valve replacement would allow the heart to recover and reduce in size. Then December 1999 the decision to go on the transplant list was made due to the size of my heart, remembering my transplant was not until 30 July 2000 I wonder just how big it did become? Aug 2000 just look at the difference! Well over half the size it was. You can see my heart is clearly visible on the right side of my spine (your left) pre-transplant, and is almost touching my ribs on my left hand side, but post transplant you can hardly see my new heart at all on the right hand side (your left). 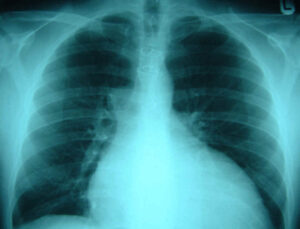 In this x-ray which is pre-transplant Dec 1999, but after my Aorta Valve replacement you can clearly see the wires which held my chest together after the operation until the chest bone heals. I can not feel the wires nor are they visible and they are also not removed.

Although during my transplant operation these wires had to be cut and removed, then my chest opened up for the transplant. After the operation my chest was closed and new wires put in place to hold my chest together until the bone healed again 8/12 weeks. These wires are not removed and I am pleased to say don’t set off airport security alarms.

The Official Description of an X-Ray
An X-ray is a type of electro-magnetic radiation, which passes through the body but is blocked to a degree by denser tissues such as bone. When a special type of film is put on the other side of the body, the picture shows how much X-ray energy has passed through in different densities of tissue. So, for example on a chest X-ray, the lung will show up darker, whilst ribs show up as white. The specialist knows the normal pattern for that type of body tissue, so they can tell if the picture is abnormal.

X-Rays allow us to look inside the body, at parts which we couldn’t normally see without an operation.

Because they are ‘non-invasive’, doctors can safely decide what the problem may be and what treatment is appropriate, including whether an operation is needed.

X-rays can be repeated over time, to show if an injury is improving – for example, a fractured bone, without disturbing the plaster.

Sometimes a medical examination or procedure is done with the help of continuous X-ray pictures so that the doctor can see what he is doing from outside the body – for example Angiogram of the heart.

Generally, little preparation is needed for a simple X-ray. For some special X-rays you will be told in advance if you need to prepare yourself such as by avoiding certain foods or taking medication.

The receptionist will ask female patients if they are pregnant, as X-rays may harm the baby.

In the X-ray department you will need to uncover the part to be X-rayed. You may need to undress and wear a hospital gown.

The part to be x-rayed is placed on top of, or next to, the X-ray film. You may need to lie on the bed part of the X-ray machine. The radiographer will move behind a screen to avoid being irradiated themselves.

You will be asked to stay still, and will feel nothing whilst the picture is taken.

You will then have to wait to make sure the picture is OK. Sometimes they need to be repeated.

The x-ray will be checked and reported on by a specialist called a radiologist. A report will be sent to the person who ordered the X -ray.