Hi my name is John, I had my heart/lung transplant on 04/01/2000. The reason for my transplant was because I have Cystic Fibrosis. This is a degenerative illness of the lungs and also affects the digestive system, for many years I had no problems and lived my life as any normal young man does. However, once I got to about 21/22 I started to get re-curing chest infections. Over the next 10 years I found that I started to “slow down” as I call it, it became increasingly difficult to run anywhere or play football, stairs started to get very difficult. In June 99 I began to get very ill and over the next 5/6 months I spent approximately 16 weeks in the London chest hospital. I was on oxygen 24 hours a day. I had an oxygen concentrator at home and one in work and a small canister I carried with me if I was out anywhere. In November I was asked if I would consider a transplant and I agreed without hesitation (I had nothing to lose by then). I did the bulk of my assessment at the London chest hospital and went to Harefield Hospital on 13/12/99 to see Dr Khagani. I was placed on the list and given a follow up appointment for the following June, I was told nothing would happen for at least six months. I returned to work as normal and then went off on Christmas leave on the 20/12/99. Over Christmas I was very ill and was admitted to Barts Hospital on the 29/12/99. I spent millennium new years eve in hospital and it was around 1.00 am on the morning of the 4th Jan that I decided I’d had enough. I no longer had a life, just an existence, which amounted to lengthy stays in hospital, being at home for a week or so and then back in hospital. As things were getting so bad and my lungs were shot I decided that as soon as my wife took over our mortgage solely then I would end it all. This may sound a bit melodramatic and also that I’m a bit of a quitter well people that know me know I am certainly no quitter, I doubt if there are many people who would have had an oxygen machine put in their office so that they can continue to work. Also until you live a life of constant hospital admittances for approximately 10 years and see your life go from being physically fit capable of running for miles, being a good swimmer and also boxed for 3 yrs, did karate for 4 yrs to suddenly not being able to walk 5 yards it tends to get you down somewhat. I also decided it wasn’t fair on my wife to see me as I was and to have to watch me die a slow painful death, when she first met me I was completely the opposite.

So like I say I decided to kill myself, then about 2 hours later the night sister Sarah Herbert came in and told me Harefield had been on the phone and told me they had a set of organs for me. I agreed without hesitation and I was very calm about the whole thing (I think Sarah was more nervous than me). I got to Harefield and my wife turned up a short while later. Just before I was ready to go down to theatre a nurse asked if I wanted to say anything to my wife so I turned to her and just to lighten the mood I said “tell Laura I love her”.

The operation took about 9/10 hours and my heart was used for someone else’s transplant. After 5 days on I.C.U. I was transferred to the ward. Recovery from the operation was very hard. I couldn’t stand for a week my muscles had wasted so much. however, after about 3 weeks I had made very good progress & was ready to be discharged. Then I had my first rejection, which was quite bad, & I was put on a machine called a c-pap (this is like a ventilator & it helps you breathe). The doctors though t I may have an infection & I was put on a septrin drip which was absolutely awful. I kept getting panic attacks & I couldn’t keep anything down fluid or food. In the end I was fed via a tube, which went down my nose into my stomach. I picked up after about a week but then I had a massive rejection. I was coming round from a brochoscopy (this is were a tube goes down your nose into your lung & they put a small amount of fluid into your lung. This then gets drawn off & once examined the doctors can tell what bugs/germs there are) when realised I couldn’t breathe. Obviously I panicked a bit, at this point thing become a bit vague all I can remember thinking is that I was going to die. I woke up sort of as I was really out of it from the drugs I was on & I was on I.C.U. again I saw my wife & her dad & I passed out.

When I was back on the ward the doctors told me my chest had filled with 3-4 litres of fluid which stopped my lungs from expanding. I was taken off cyclosporin & put on tacrolemus (fk506), which is a different immunosuppresent. Things picked up after that although the initial side effects of the fk506 were a bit disconcerting but theses eased off after 3/4 days. After 2 months from my op. I was discharged & things were going very well. I returned to work full time in May (5 months after my op). In June my spirometry started to drop (which is one way of recognising rejection in lung transplant patients) so I was admitted for rejection & discharged after 10 days. However, my spirometry started to drop again, so once again I was admitted for rejection. After 10 days I was discharged again. This happened 3 more times, however for the final 3 admittances there was no sign of rejection. I was even told if things didn’t improve I would have to undergo radiation treatment. I was in work one day in September when my doctor phoned me & told me I had t.b. by this time I had lost nearly half my lung function. So I went back to Harefield & was treated for t.b (which luckily was closed t.b.(non-infectious)). The only problem was that the t.b. drugs messed up my anti-rejection drugs so it took nearly 10 days to get the level right. After this things picked up. However, in October it transpired that due to the high doses of steroids & anti-rejection drugs I now had diabetes & had to be admitted to get my insulin doses sorted out. After 2 weeks I was discharged.

Since then things have gone fine. I’ve gained back all but half a litre of my lung function & I can even jog a bit now. It may seem like a lot that has happened in 12 months but even when things were bad it was still all worth it. I told someone once that the only thing I wanted from my transplant was to be able to take a deep breath & go for a short walk without coughing my guts up. I’ve had that. Some of my friends say that I’m very brave because of the transplant etc. but I don’t see that, in fact I don’t see my transplant as a big deal. I don’t mean to sound ungrateful because I’m not but I knew from the age of 19 I would one day need a transplant. Most other people who have had transplants would not have even entertained that thought when they were fit & well with no medical problems. But for someone with cystic fibrosis it is a reality you have to accept. To me my transplant was the final step in the treatment of c.f. if I didn’t have the transplant I would have died so I had nothing to lose.

On a final note I would like to say that my sympathies & gratitude go to the donor’s family, it must have been a very difficult decision to make when you lose a loved one. I would like to thank Dr Khagani who I haven’t seen since my op to thank personally. All the nurses at Harefield & the London chest hospital, who cared for me pre-transplant. My friends who know who they are who went beyond the call of duty. & last but definitely not least my wife Daniela who must have gone through hell during the time I was in Harefield. 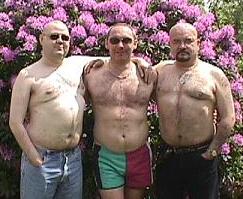 I have met John many times since my transplant, the first time was in hospital a few days after my transplant as we shared a room for a few days.
In the photo we are in my back garden comparing scars, since John is Heart & Lung recipient his scar follows a bra line, whereas mine is straight down the center of my chest. Micky Byrne is also in the photo and had also had a heart transplant.