My name is Ann Woodbridge I am the membership secretary for the ‘Hamsters’ (Harefield Transplant club) the unique club that I feel honoured to be a member of.

I had Rheumatic fever when I was eleven years old, which damaged my heart I was told that it was only a murmur.

I led a reasonably normal life, got married and had two wonderful daughters, was then told that because of my heart problem not to have any more children.

In 1976 I was taken ill with a complete heart block, which apparently meant that the electrodes in my heart was not working any more and I was then sent to HAREFIELD hospital where I was given a pacemaker.

I had had the pacemaker for fourteen years when things started to go very wrong, they gave me a new pacemaker, which my body rejected they then tried another two times before they could get my body to accept one but by this time I was told that I had Cardiomyopathy and had had it for at least ten years and the only thing they could do for me was a heart transplant but at this point I was not put on the transplant list.

After this I repeatedly went into heart failure and spent the next nine-month’s in and out of Harefield (D.East ward). I gradually got worse until I had to rely on wheelchairs & stair lifts etc.

Approximately 21st June 1990 I was again admitted to Harefield where I told the doctors that I could not go on like this, as I could not see a light at the end of the tunnel so they said that they would speak to Professor Yacoub about putting me on the transplant list.

On Sunday evening 24th June Dr Khaghani came to see me and told me that I was now on the list for a transplant. Pam Baldock (Co-ordinator) also came to see me to give me all the details but also said that I may have to wait quite a while for a donor heart.

I didn’t mind this as I had seen a lot of patients spending month’s on the ward awaiting a transplant, then having their transplant and coming up to visit us looking so well and being able to walk about for the first time in weeks or month’s.

I decided that I would go home for a few days and then on Monday 2nd July 1990 (eight days after being put on the list) I received a telephone call from Pam Baldock telling me to get there as soon as possible as they had a heart for me, I dropped the phone and started to cry – well this was it and I wanted it to happen so much that I could not believe it.

I waved goodbye to my husband as I went through the doors to the operating theatre and said see you later, I was very calm I knew that I was going to pull through this as I had every faith in Dr Khaghani and all the staff.

That was one of the best days of my life and I am very grateful to everyone at the hospital for all that they have done for me over the years including My husband (Brian) and all my family for caring for me.

I would also like to say a very big thank you to my Donor and her family for their brave generosity, all I know about my donor is that she was a lady of 22 years of age.

For anybody out there who is waiting for a transplant my advice to you is go for it, I have had nearly 11 extra years and without that I would not have known my Grandchildren whom I love to bits and can’t get enough of.

Life is precious and being given a second chance makes you appreciate life to the full. 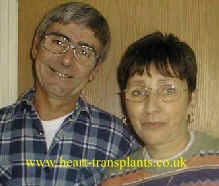 This is Ann with her husband Brian, sadly Brian had now passed.
I met Ann and Brian for the first time while still in hospital recovering from my transplant. Ann was the members secretary for Harefield transplant club  and often visited the wards to day hello to us newbies.
Brian had a walking stick with him when they visited me and I assumed he was the one who had a heart transplant, not Ann as she looked so normal, fit and well.
A few months later I joined the committee of the Harefield Hamster Transplant club, called hamster as often one of the side effects of cyclosporine (a anti-rejection drug) gave you puffy cheeks for the first few months of transplant. Now other anti-rejection drugs are often used, I still take cyclosporine.