Sunday 30th July 2000 5am the professor and his team operated on me. I believe the operation took about 6 hours to perform.

I never got to meet the professor before the operation, in fact I only met him by chance 3 weeks later. He was in the out patience’s department chatting to a doctor, so I approached him and of course thanked him in person.

Then shortly after that we met again, this time I had just had an Angiogram and was laying on a trolley outside the theatre. When the professor was passing he stopped we had a short chat while he looked at my notes.

The next time we met, was only a couple of weeks later. This time I was in hospital waiting for the results of a biopsy I had just had. While walking down a corridor, the professor was going the other way he stopped and ask how I was, to my surprise he remembered my name

Sunday 9th September 2001, I got to meet the professor again, this time it was just after I had taken part in the Harefield Jog. We had a chat for about 5 minutes and we were joined by one of his daughters. I also had the opportunity to give the a pen each with the date of my transplant and the website address.

I have slowly been finding out about the Professor, he is an extremely hard working man and does not get paid for a lot of his work, a least not in monetary terms. His payment is far better than that, he gets job satisfaction from helping others who are in desperate need of his skills.

I would even go as far as to say perhaps he should be known as Saint Professor Sir Magdi Yacoub. This has nothing to do with the fact that he operated on me, but the more I find out the more I salute him.

He doesn’t even look for credit or praise for this unpaid work, giving up his free time that could be spent with his family to work and save life’s, although he received The Peoples Award in 2007

Sir Magdi, came to Britain in 1962 and started his pioneering heart surgery in 1967 before beginning work at Harefield Hospital in 1969. In 1980 came his heart transplant operation on Derrick Morris, who went on to become one of the longest surviving heart patients over 25years post, and among celebrities whose lives he extended was much loved comedian, Eric Morecambe.
______

The renowned heart surgeon Sir Magdi Yacoub returns regularly to his native Egypt to treat sick children free of charge. In Egypt hundreds of children never get treatment and die before their teens.

The mood of the adults and children queuing along the long, white hospital corridor is fraught but buoyantly expectant, as though they are waiting to see a famous film or pop idol.

In a sense, they are. Professor Sir Magdi Yacoub, the renowned heart surgeon, is regarded as a virtual deity here in his native Egypt. Particularly today. Today he and his British team of experts have the power of granting life, or at least the chance of it, to these children, some of the poorest and sickest in the country.

Their parents have brought them here to Luxor International Hospital in droves, many travelling for hundreds of miles on buses and trains, desperate to wait in line for a 20-minute consultation with cardiologists who will assess whether their child can be helped. If they are lucky, they will be given surgery immediately and probably be cured for life. If not — if their heart disease is so advanced that they are beyond the benefit of surgery — their parents are quietly taken aside and told that nothing can be done; their child is going to die. This is the worst part of a Chain of Hope mission.

Chain of Hope is a British charity set up by Professor Yacoub in 1995 to provide free heart treatment for children from poor or war-ravaged countries. Sometimes sick children are brought to Britain each year from places such as the Palestinian National Authority, West Africa, Mozambique, Jamaica and Iraq for corrective treatment. But several times a year the team, including two surgeons, cardiologists, anaesthetists, ITU nurses, intensivists and physiotherapists, who volunteer to give up their holidays, travel on missions abroad where they work, without payment and for 13 hours a day, in the local hospitals.

In southern Egypt word has spread that Professor Yacoub — known locally as “Mr Magdi” — and his team are coming. Some of the families rose at 3am to ensure that they arrived early, the children now patiently holding their medical files in the queue. Four of the patients have travelled from the Palestinian territories. As the doctors flit between consultation rooms some parents in the queue thrust their children into their faces, pleading: “Doctor sahib, Doctor sahib . . . please help my baby.”

To many Egyptians, Professor Yacoub is more famous than the President, Hosni Mubarak. Lizzie Orcutt, the photographer who took these pictures, says: “He is an incredibly revered figure, almost God-like. An interview with him was broadcast live on the TV news and people would follow him around asking to have their photographs taken standing next to him. Everybody seems to know who he is.” There is a particularly poignant moment when, possibly prompted by his parents, one 10-year-old boy named Beshoy, who has travelled from Cairo, manages to follow Professor Yacoub and present him with his file pleading: “Please will you treat me?” Professor Yacoub agrees.

As the day wears on and the atmosphere becomes more tense others, near the back of the 100-strong queue, are beginning to worry that the team will go home to Britain at the end of the day and their chance will be lost. In fact the team will stay for nearly a week. But there are only certain operations that they will agree to perform. Heart transplants, for instance, are out of the question due to the huge amount of intensive and after-care needed. The majority of operations they will carry out are on “blue babies”, those suffering Fallot’s Tetralogy, a hole between the chambers of the heart and a narrowing of the artery. Ironically, this requires more complicated surgery than that of a heart transplant but is a relatively routine procedure. Much of the surgery is also to correct defective heart valves — a condition which in Britain would normally be rectified within a few weeks of a baby’s birth.

Many of the children in the queue already show classic signs of the illness. Their skin is blue — in extreme cases almost black — and the whites of their eyes are red due to a thickening of the blood caused by oxygen deprivation. They are also lethargic and breathless. In Britain their illness would never have been allowed to develop to this stage before surgery, but for an impoverished Third World family there is no choice. One in 100 babies worldwide is born with a hole in the heart but one operation usually provides a complete cure if the child is treated in time. In Eygpt there are hundreds of children who never receive treatment and die before their teens.

All the children have been referred to the charity by their local doctors. When they arrive some of the families may have to wait in the queue by the paediatric department for up to 13 hours. If time runs out they may have to return the following day. Their first checkpoint is with Dr Rosemary Radley-Smith, a paediatric cardiologist at Harefield Hospital, Middlesex, and Dr Piers Daubeney, a cardiologist at the Royal Brompton and Harefield NHS Trust, London, who assess and screen each of the patients. Of the 300 they see, 27 are recommended for surgery, which is performed by Professor Yacoub and his fellow surgeon Mr Babulal Sethia. The youngest patient is one, the oldest is 15, and the operations take place, back to back, over a five-day period. Some of the intensive-care staff will stay on for a few days when the surgeons have flown home to help with the patients’ recovery before handing over care to the local hospital.

For Dr Daubeney, this is his second mission. Last year he was part of a similar operation in Cairo. “It is an amazing experience,” he says. “Multitudes of people turned up wanting treatment for their children, so much so that guards had to be brought in to calm things down. Parents will be thrusting their child in your face begging you to look at them. It is so difficult because they all need help.

“Sometimes it is tragic when the children are too ill for us to treat. If they have suffered from a hole in the heart over a prolonged period their lungs are put under such high pressure that they become damaged and we cannot operate.”

Dr Radley-Smith, who this year won an award for her work, explains that the charity’s policy is to grant surgery only to those children it believes it can cure in order to make the most of its limited budget. A typical mission will cost about £40,000, which makes these 27 operations an incredible achievement given that one heart operation, paid for privately, can cost £20,000.

“This work is very important to us because these children are generally very poor and wouldn’t have access to this kind of treatment normally,” she says. “We tend to operate only when we are confident that it will be successful. One of the most difficult parts of the job is saying ‘no, we can’t operate because it will be too complicated’ or that their child doesn’t fulfill the criteria.”

The charity was founded in France in 1988 as La Chaine de l’Espoir as part of Médécins du Monde. In 1995 it became an independent charity and Professor Yacoub established Chain of Hope UK. The name refers to the chain of volunteers needed when a child is brought to Britain for treatment, including airlines, which often provide free tickets, a host family who will provide after-care, the hospital itself and the medical team. The cost of bringing one child to Britain for open-heart surgery is £3,500.

There have been dozens of success stories over the years. There is Gerges Sami, from Aswan, who came to the UK for treatment in 1998 after a mission in Egypt ran out of time to treat him. Although he still lives in poor conditions he is now in excellent health. And there is Nesma Mahmood, who was treated in Cairo two years ago and was given surgery for a hole in the heart. The most famous patient was Arnaud Wambo, a seven-year-old boy from Cameroon. In 1996 Yacoub performed a four-hour heart operation on him at Harefield Hospital, Middlesex, watched by the late Diana, Princess of Wales, who was fully kitted out in a surgical gown 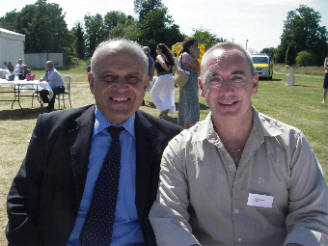 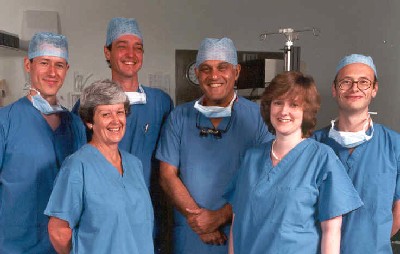 Magdi Yacoub and my transplant team

Here I am on the start line of the Harefield Hospital fun run 2002 with my transplant surgeon Magdi Yacoub. I asked him if he would be the Honourable President of the charity, he agreed if I did him a small favour which I did.
Later that week his secretary Susan Wheeler confirmed that Magdi had agreed to be Honourable President.
That small favour has remained a secret ever since… 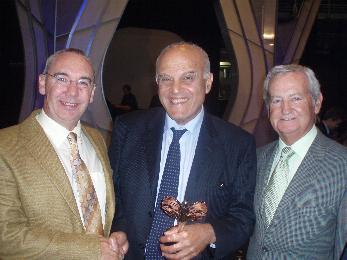 I was honoured to be asked to attend The Pride of Britain Awards when Magdi won in 2007.
My dear friend Mike Doyle (heart transplanted 1989) and Vice Chairman of the charity at the time also attended the event.
Sadly Mike has now passed due to kidney issues, but thanks to transplantation Mike gained over 20years extra life and loved playing golf.